Football club Real Madrid last night lost the final of Copa del Rey from FC Atletico Madrid. This was their last chance to win a title in this year, and in that way to justify all the money they gave to buy expensive players over the past few years. They finished with empty hands and to hurt even more, in front of their fans on Santiago Bernabeu (their football stadium).

Famous self-proclaimed Special One (Jose Mourinho) received red card for the inappropriate behavior and leaved the match in the 2nd period, exclaiming after the game that this was the worst season in his life. He never had a season without a title.

The whole year was pretty much controversial for Jose Mourinho, and the attention of the press was all on him and his broken relationship with some of the key players for Madrid (like Casillas, Pepe and Ramos). His whole year was one of infamy and constant quarrels with the press, other coaches and the players inside the club. There were rumors that tension even existed between him and Florentino Perez (the president of R. Madrid).

Personally, I didn’t believe he will end up without winning any title (I speak as a fan of football game, not as an astrologer). I think despite his professionalism, he has huge luck in life (and in sports you must have that!) and it is hard to imagine him without any title in his hands. After loosing this title last night, I was curious to look at his chart from the yearly perspective, and here are my improvisations, ad hoc, in regard to that.

He celebrated his 50th birthday this year, so the annual profections are in Pisces or third sign from ascendant, where Jupiter its Lord is found. Now, any superficial astrologer would pronounce very potent year by noticing this only and without getting into more details delineating all factors that give their influence in certain year.

I would not go in all the details, but will try to give some few important ones, and those of you who are familiar with the Hellenistic and Perso-Arabic astrology techniques, would investigate further in to the heavenly influences.

This is his Solar Return chart: 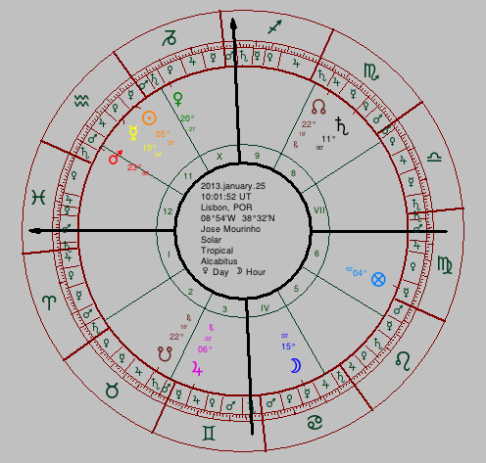 We can see here Jupiter, the Lord of the Year, pretty much weakened. He is in his anti-domicile, the place where according to Serapio, planets ‘turn bad’, and retrograde. So two weakened conditions for this planet which is quite powerful in his birth chart. In natal this Jupiter is in 3rd sign and 2nd division, in Revolution it is in 4th sign and 3rd division.

In the chapter called “On the significations of Jupiter if he were the Lord of the Year, and were of a bad condition”, Abu Ma’shar says:

“If Jupiter were the Lord of the Year and in both the nativity and the revolution appearing retrograde or under the rays, or in an alien place, or occidental or in the domicile of a malevolent, or cadent from the angles and in contrary places, it takes away the renown of him whose revolution it is, and decreases his luckiness, and puts down his glory. It even signifies a multitude of expenses and a troublesome pouring out of riches, and he will do these things with a voluntary and spontaneous will, for the reason that he craves praise from many people“. [Abu Mashar, On Solar Revolutions, trans. Benjamin N. Dykes, PhD, p.93, underline mine]

Abu Mashar here speaks about the amount of bad conditions Jupiter has in certain year, and in another place he speaks, or advices us to look into the ‘proportion’ of the bad conditions of certain planet according to the factors listed in the quote above. This Jupiter is in: 1) Contrary or alien place, 2) Retrograde, 3) Occidental. So, the ‘according to the proportion’ factor here, we have 3 out of 6 conditions. This Jupiter is not of a good condition.Abu Ma’shar says that this will diminish his luckiness, which really did, he won nothing! He claimed himself that this was the baddest season in his life. However, this Jupiter is not baddest of the bad simply because he is in good condition in natal chart, even though, there also appears to be cadent, occidental, and contrary to the sect in favor. Still, he is in his own sign without heavy influence of malefic planets.

But for analyzing this furthermore, I would like to see few more factors involved.

I just could not ignore the transit of retrograde Saturn currently on his MC. Saturn rules his sub-period in Firdaria and hence it is relevant for examining his circumstances by transit. Actually, I am of the opinion that the transit of Saturn would be pretty much important even if he was not involved in Firdaria rulership, but this is accentuating him even more as to analyzing his conditioning.

In the chapter “On the ingress of Saturn to his own places and those of the rest of the planets”, Abu Mashar gives us indications as to what means when Saturn ingresses (enters) certain sign where a planet is positioned or certain place a planet owns. Now, I have talked with some people about these chapters in Abu Mashar’s On Solar Revolutions, and some of them were of the opinion that what is meant here is Saturn’s ingress in places where certain planets are positioned, and others were of the opinion that what is meant here is the ingress of Saturn in places which certain planets rule. I think that both these approaches to the delineation tips given by Abu Mashar have relevance. About Saturn ingress of Saturn into the places of Mars, Abu Mashar says:

“And if Saturn at the time of the revolutions will reach the [natal] place of Mars, and Saturn will have dignity in either the Ascendant of the nativity or in the revolution, or in the Lot of Fortune…
…he will be deceived about his own operations and will be idle in [his] education, and his thoughts will be unjust; and he will be of middling faith in his own tenets, and he will be accused on account of this“. [Ibid. Dykes]

Now this is extremely exciting passage, because Abu Ma’shar explains the whole situtation of Mourinho at the moment. His Saturn rules Ascendant, Lot of Fortune and Spirit, so he has relevance very much for his personal actions and behavior. Now, Saturn entering sign of Mars, Abu says that his thoughts will be ‘unjust’. What he does to the icon of R. Madrid, Iker Cassilas, is according to most of the fans and people who are more objective to the situation, real injustice! “He will be accused on account of this”, says Abu Ma’shar, and he really is. This year in R. Madrid brought him infamy and pretty much lost to his reputation as one of the best coaches in history of football game.

This Saturn transiting over MC in sign of natural malefic, is clearly not a good sign for his career and actions (MC), also for his reputation. Look at the stakes [angular signs] from Saturn. Saturn transiting is dominating planets in Aquarius: Moon, Sun and natal Saturn, and in the same time is dominated by natal Mars in the 10th from Scorpio.

Abu Ma’shar ends with: “And if Saturn will have no dignity with the aforesaid, he will suffer evils and be saddened on account of brothers and friends [because Mars signifies this, I.S.], and he will jump at the chance for travel and will go on a foreign journey“.

I think that he will leave R.Madrid this summer and will go to coach another football club ‘in foreign country’. Saturn ingress in the sign of his natal MC in sign of Mars, alongside the other indications would bring him [as he already brought him] infamy, loss of reputation and leaving not in a good terms. I suppose this Saturn brought him a good lesson regarding his thoughts and unjustified actions which contribute for the loss of harmony inside the team of R. Madrid in the past year.

As a P.S. I want to add one more thing, looking at the chart now after I wrote the post. Saturn is sub-lord of Firdaria in which Sun is overall lord of the times. So, Saturn will dispose the years of Sun, and we should look at the natal position and inter-relation of these two planets and their relationship in the Solar Return chart. Saturn is technically combust and invisible, but according to the Hellenistic astrology principles, planets in their own places bear the combustion better then in other places. But still, Saturn and Sun are natural enemies, the connection between these two is rarely good. One is the lord of the light and the other of the darkness. Mars is regarding this conjunction from opposition and this is not good for his reputation at all. Now in the year chart Saturn is dominating (being in 10th from the Sun) the Sun and even though he receives the Sun, I really don’t think that this mitigating condition is mitigating the natural enmity of these two planets 100% and turns them into cooperatives. Sun natally rules the 8th  and is in its anti-domicile where promises more then it can deliver, and Saturn is lord of Mourinho’s actions in his chart, by ruling Fortune, Spirit, Ascendant and being exalted Lord of 10th sign in natal. 8th Place rules the alliances of the public enemies (2nd from 7th) and Sun ruling the main period in Firdaria would awake such dispositions in his chart and life. Being in its anti-domicile, it is probably good to have it ruling the 8th since this would make the public enemies and their alliances weaker, and it is interesting how Mourinho very often wins his wars. When he substituted Casillas, the fate brought him exceptionally good goalkeeper in the name of Diego Lopez who saved them in many important matches. This was kind of proof to Mou that he didn’t put Casillas on the bench for nothing. But still, the fans didn’t like this decision of Mou, because Casillas is their favorite. Many of the players took the side of Casillas, so we could say that they are the alliances of Mou’s public enemy (Casillas). Their war is obviously public, they do not hand shake before nor after the matches. It is really interesting to notice these details in the birth chart when Sun and Saturn are disposing the times, and the activation of the things they promise in Mou’s natal chart, with the addition of the yearly chart and transits. I think we need to look at the overall picture, the more broader one, even when we look at the yearly divisions and charts like the Profections and Solar Return. Firdaria or the disposition of times gives an overall picutre of the times into which yearly charts and divisions happen to play role.