What is Rank? What is Honor?

These social categories need some clarification.
Dictionary.com defines “Rank” as

High position or station in the social or some similar scale.

An abstract concept entailing a perceived quality of worthiness and respectability that affects both the social standing and the self-evaluation of an individual or corporate body such as a family, school, regiment or nation.

It seems that the word “Rank” is applied to the persons who holds some position in the society and has gained some level of respectability from other people. These people with such social status are somehow elevated in the society and hold some position of honor or dignity, some respectfulness for what they have done or where they have come from (Princes for example, are people who are with high social rank just because they are born in royal family. Today is popular the children of some celebrities to be in the higher social status then their peers just because they have popular mother or father).

Rank is related to Eminence and Fame too, but I will not enter in to clarification of those terms in this post, and leave it for some future article.

I think that in the History of Astrology, first who talked explicitly on this matter is Ptolemy in his Tetrabiblos, Book IV, chapter 3, “Concerning Fortune Pertaining to Rank” in translation of Robert Schmidt.
Hephaistio in second book of Apotelesmatics has similar chapter, but with an addition of a very practical horoscope which is assumed to be the chart of the Emperor Hadrian.

The chart of Garry Kasparov given on astro databank is of B rating:
http://www.astro.com/astro-databank/Kasparov,_Garry
I have found it to give pretty good results though.

Garry Kasparov is born in Baku, Azerbaijan. It is known as the youngest world chess champion ever, wining it at 22 years of age after beating the famous Karpov.
Further information on his nativity you can find on the link I’ve just posted, or on wikipedia.
Let’s look at the chart. 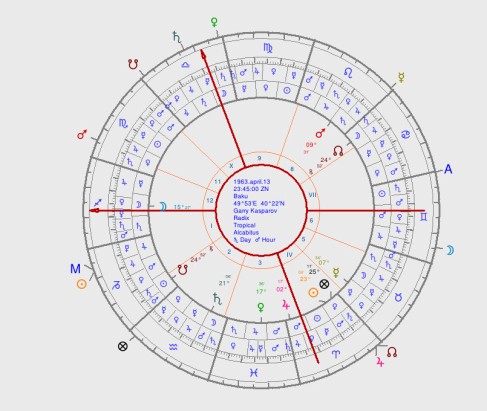 Ptolemy informs us that to examine the rank of the native we must look at the disposition of lights and the ‘familiarity’  (dignity) of their spear-bearers. If both lights are angular and in masculine sign, or at least one of the lights is angular,  and has the spear-bearers in good dignity and angular (or configured with the MC), this gives kings.

Next Ptolemy gives gradation in which I would not go here, but it is good to know that if some aspect of the configuration given above is missing, then the rank will be lesser.

In the chart of Garry Kasparov we can see that both luminaries are masculine and both are angular (at least Sun is angular by division, though in the 5th sign, which is one of the good places).
Ptolemy would like to see them ideally both above the horizon, but the case of Kasparov is not bad either.

Moon as Light of the Sect is on the Ascendant. If we look at the Hephaistio’s analyse of Emperor Hadrian’s chart we can see that he put great importance on the thing that Moon is in the first pivot (I use here Schmidt’s usage of Pivot as angular sign) applying toward the horoscopos. It is the same with the chart of Kasparov. Moon is applying toward the horoscopos in 2 degrees orb.

Further in that analysis Hephaistio looked at the spear-bearers of the Moon (Venus and Mars) and found them to be “familiarly situated”, which means that they were in places where they have dignities. Venus was in Pisces where she is exalted and Mars is also in Pisces in its own bound and triplicity. They were on the western side of the Moon, i.e. Sun.

Here we have Venus also in her exaltation and being west from the Moon, also being on a pivot.

Saturn and Jupiter are spear-bearers of the Sun and they are also in their own dignities. Saturn is in its domicile in Aquarius, and Jupiter in its own triplicity and bound in Aries. Jupiter is Almuten Intelectus, and being in one of the best oriental phases (from 15 to 30 degrees east from the Sun) in dignity, brings quick and rather philosophical mind.

Saturn is distinguish itself from the spear-bearers because it is in its own domicile, it rules MC through exaltation and is configured with the MC through trigon relationship. He is a spear-bearer of the Sun which is in its own exaltation. Saturn is oriental, direct in motion and in companion to Mercury which is in phasis (planet which also distinguish itself in nativity), making appearance 7 days after the birth, gives a deep and very profound strategy thinker. Mercury is also bound ruler of the MC, so we can see that both, Saturn and Mercury, pertain to the action and praxis of this nativity.

In addition, the twelfth parts of Saturn and Venus (both rules MC) are in Libra, the sign of the MC.

Ptolemy, and Hephaistio also, advises us to look at the lord/s of the twelfth part of the Lot of Fortune in order to investigate the fortune and substance of the native. We can see that the twelfth part of Lot of Fortune is in Aquarius configured with its ruler in the same sign, and Saturn is configured itself with the MC and which twelfth part is also on MC. Connection between his career and money (Saturn rules 2nd and is in 2nd division) is well established in the chart.

This is my first investigation on this topic, and I hope that in future posts I can find more information and practical charts on this rather difficult concept to investigate.